The bottle of So Sweet Lolita Lempicka 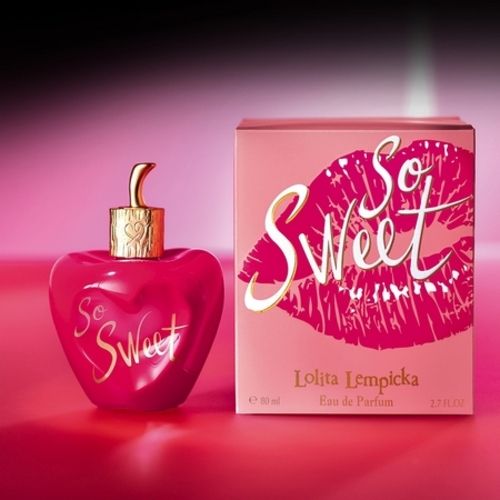 So Sweet, the “So Pink” look perfume by Lolita Lempicka

More than ever, with her new perfume, Lolita Lempicka is particularly feminine. The designer is known to take us to an ever more magical and dreamlike world. Nevertheless, on the occasion of the release of So Sweet, it takes care of pink. He invites us to see the life of the good and in a surge of femininity and good humor. Also, this also translates into its look. So Sweet has a particularly sparkling and perky bottle, designed to fill our eyes and instinctively make us want to bite into the apple!

Like a desire to succumb to the temptation of So Sweet

So Sweet is nestled in an absolutely tempting setting. Indeed, as always, Lolita Lempicka reclaims the symbol of the apple. Nevertheless, this emblematic fruit of the brand has today been soaked in an absolutely sublime lacquer. Thus, it displays a pop, hyper glossy and feminine shade in a bright cherry tone that immediately catches the eye. What is more, the front of this bottle is as if bitten by a huge mouth. This bite drawn in tone on tone forms a pretty heart and suggests to us that this is a piece of fruit to eat. What is more, it is further accentuated by the golden presence of the name of this perfume written in a playful handwriting. This is matched to the cabochon of the bottle. This forms a stalk of sparkling color as if to suggest that So Sweet is a magical fruit directly fallen from an enchanting tree.

Lolita Lempicka and the apple symbol

Also, this is not the first time that Lolita Lempicka has used the symbol of the apple, on the contrary. This fruit is today considered to be the icon of the brand. It must be said that it alone covers multiple meanings. The Romans associated with it the image of a coveted, tempting and dangerous fruit. The legend of Heracles said that he was born on the Tree of Life. Likewise, it is the apple that is at the origin of the Trojan War. Indeed, it had been offered to Aphrodite for its beauty, triggering a horde of protests. Likewise, Christians associate the apple with the forbidden fruit crunched by Eve in the Garden of Eden. However, note that the apple does not only have negative connotations. Celtic mythology, for its part, sees it as a symbol of fertility. Furthermore, let us not forget that the apple is at the origin of one of the greatest discoveries of our civilization: the universal gravitation of Isaac Newton. Thus, Lolita Lempicka presents her new perfume to us as a concentrate of temptations. Should we succumb to it? No one knows … It’s up to you!